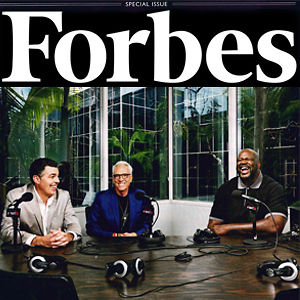 Clad in designer sneakers and a slim black blazer, 73-year-old Norm Pattiz gestures excitedly at a framed photograph in his office–not the postcard-size photos of him with Bill Clinton and Madeleine Albright but a life-size action shot from a Los Angeles Lakers game. Seated in the front row, among the likes of Mark Wahlberg, Ari Emmanuel and Jack Nicholson, is Pattiz.

Hanging with the front-row celebs isn’t just a perk for Pattiz; it’s the business model of Courtside Entertainment, the Beverly Hills-based parent of his latest venture, PodcastOne. Just as he did with radio syndicator Westwood One, Pattiz believes he can turn his podcasting outfit into a national juggernaut–and revolutionize an industry whose commercial clout still lags its cultural footprint by a stunning margin. A 2014 report by ZenithOptimedia estimated industrywide ad sales at a paltry $34 million a year.

“It was a $34 million business before we got into it,” says Pattiz. “In short order, another zero will be added to that, and I think the potential for growth is going to make this an industry that will be in the billions.”

There are plenty of reasons to believe he’s right. One in three Americans has listened to a podcast, and thousands have created their own. It can be as simple as recording a rant and uploading it to the Web via SoundCloud or iTunes–or as involved as big-budget smashes like Serial, which Pattiz acknowledges he never would have green-lighted: “The return would have been too risky and too low.”

Silicon Valley has taken note of podcasting, too. This American Life alum Alex Blumberg helped launch a podcast network, Gimlet Media, in 2014; its first offering, Startup, chronicled his company’s founding. Blumberg raised $7.5 million from Betaworks, an incubator, and Lowercase Capital, the venture fund of billionaire Chris Sacca. Both were attracted to the mix of a new medium and public-radio-level journalism.

Pattiz is banking on celebrity. Most of his 200 shows feature prominent names like former Laker Shaquille O’Neal and comedian Adam Carolla. “There will be the Game of Thrones of podcasting,” Blumberg says, “and there will be the Keeping Up With the Kardashians of podcasting. I think his strategy is great.”

Indeed, Carolla’s show averages 800,000 downloads per episode; PodcastOne clocked over 1.5 billion downloads overall in 2015 as revenue soared to $20 million, up from just shy of $2 million in 2012, its first year. In July the E.W. Scripps Co. scooped up competitor Midroll for $50 million (Pattiz believes the company is two-thirds the size of his; Midroll declined to comment for this story).

The world of podcasting may be new, but for Pattiz it’s familiar turf. “People want to create this chasm between podcasting and terrestrial radio,” says Carolla, whose hosting resume includes Westwood One’s Loveline and Comedy Central’s The Man Show, with Jimmy Kimmel. “It’s the exact same model in my mind: Create a show, do it consistently, send out advertising.”

Pattiz has plenty of experience doing that. In 1976, after he lost his job as sales manager of a Los Angeles television station, he decided to take the TV syndication model to radio and founded his one-person company in L.A.’s Westwood neighborhood: Westwood One.

While most American radio stations are owned by just a few conglomerates today, 40 years ago no one company was allowed to control more than five stations. But there was no rule prohibiting lots of stations from buying the same show, so Pattiz created a 24-hour Motown special, complete with unreleased tracks and artist interviews. “I wound up getting a couple hundred radio stations who thought it was interesting enough that they’d run it,” he says, “and then spent the next months and years producing programming for the four national advertisers who had a really good experience with the Motown special.”

At the end of his first year he had $200,000 in revenue. Within a decade he had $600 million. He took the company public in 1984, and it peaked at a market cap of nearly $4 billion before Infinity Broadcasting took over its management. Pattiz stepped down as chairman in 2010 and formed Courtside Entertainment as a consulting entity to handle long-standing Westwood One relationships with high-profile talent.

Shortly thereafter a friend introduced him to Kit Gray, a young entrepreneur who was grossing nearly $2 million a year selling podcasts like Carolla’s to direct-response advertisers such as Shari’s Berries and LegalZoom. “I thought, ‘This is a digital Westwood One without the necessity of having to go get drunk with the program director to convince him to carry your program,’ ” Pattiz says. “ I was shocked to find that there were no serious players of any size or any bandwidth in the podcasting business and that national advertisers really didn’t use the medium.”

Pattiz and Gray went into business together, launching PodcastOne from Courtside’s offices. One of the first people Pattiz told was his Staples Center buddy Ari Emmanuel, who is chief of the talent agency WME and whose clients were looking for digital revenue streams. Other agencies followed, and soon wrestler Stone Cold Steve Austin had signed up to do PodcastOne’s first show, with Carolla shifting over soon after.