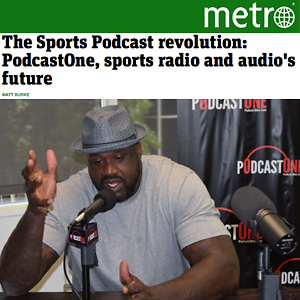 We live in a rebellious age when it comes to content.

No one wants content to be force-fed to them as people want to watch, listen and read things on their own terms – not when a media company tells them to.

Sports talk radio has been thriving since the early 1990s in the U.S., and there are currently more sports talk radio stations than ever before. So the appetite for sports audio is enormous. In the past 10 years, a new alternate sports audio universe has emerged. It’s a world where niche, little commercial interruption and zero structure reigns supreme. It’s sports radio - with no strings attached, and it’s already a dominant force in the media world.

PodcastOne, the primary podcasting company in the world, generated a whopping 1.5 billion podcast downloads in 2015 and works with over 100 brand advertisers. Metro spoke with PodcastOne’s founder and executive chairman, Norm Pattiz, about the difference between sports radio and podcasting, as well as where the business is headed. Pattiz was also the founder of Westwood One, which became America’s largest provider of news, sports and entertainment in the broadcast industry.

“You’re not limited by radio formats with podcasts,” Pattiz, who spent over 40 years in the radio syndication business, told Metro. “I think one of the chief attributes for us is that we’ve got a pause button. Radio doesn’t have that, and when you get out of the car – that’s it for the day.

“We, in podcasting, can do anything. It reminds me of my early days at Westwood One when the company had 30 people instead of 3,000 people and it was smaller. I had more fun then, and I’m having a blast now.”

Sports talk radio will often hammer home certain topics throughout the course of a day. Vontaze Burfict stomped on LeGarrette Blount’s leg? What an A-hole, that’s half a show right there. NFL ratings are down? Why is that? There’s your other half.

With sports podcasts, though, the listener can pick and choose the topic he or she wants to listen to. For instance, Pattiz says Podcast One will soon unveil a podcast by Forbes devoted only to the business side of sports. This niche idea began with the first “sports” star of Podcast One, former pro wrestler “Stone Cold” Steve Austin, as now there are hundreds of pro wrestling-devoted podcasts.

"There was an immediate response with [Austin],” Pattiz said. “He let his fanbase know about it on social media and the combination was instant. Now Steve does two podcasts a week, not just one, and we have [fellow pro wrestling personalities] Chris Jericho and Jim Ross doing podcasts. That’s not the kind of specific sports talk that you would get on regular sports radio.”

Sports podcasts began popping up 10 years ago, with then-ESPN employee Bill Simmons leading the charge. His “BS Report” podcast routinely got over 30 million downloads per year in the early portion of this decade and now Simmons’ “Ringer” podcast brands itself as the most downloaded sports podcast of all-time. PodcastOne does not feature Simmons, but it does have his pal, Adam Carolla, who is the most successful podcaster of all-time. Just one typical Carolla podcast gets over 250,000 downloads.

“Adam dwarfs them all. He’s made more money in podcasting than anyone,” Pattiz said, of the former terrestrial talk radio host. “That said, 40 – maybe even 50 percent – of our top podcasts focus solely on sports.”

Pattiz does not exactly have a “get with the times, already!” opinion of traditional sports radio. He believes that sports podcasting and sports radio will be able to thrive for years to come.

“[Sports radio] will never go away,” Pattiz said. “Play-by-play on radio has always been interconnected to the talk format. Always will be. In most cases, if you want play-by-play sports, you have to carry sports talk as well. They’re looking for as close a connection as they can with local listeners. They want pre-game and post-game talk.

“Radio has its own set of many, many problems … I don’t think sports is one of them.”

Burke: I always hear the same ads pop up on podcasts, like Me Undies, Onnit, Blue Apron, Stamps.com – is that by design, and were advertisers hesitant at first to get involved with podcasts?

Pattiz: We do have a core of advertisers. All of it is direct response advertising. There’s a call to action, which immediately leads to buying a product. Sponsors can measure this. They know that it pulls. The listener is much more influenced to buy something if the host of a program is talking about it directly. Then you add in that there’s a fraction of the commercial load with podcasts. You might get four spots in one, hour-long podcast. You might get 16 in one hour on sports radio.

Burke: Can you bring me up to speed on CBS Radio. I saw in March that they were planning to sell, then they kind of backtracked. What’s the deal there?

I will say that they are a good company. They deliver a lot of positive cash flow. The problem is, radio isn’t the sexiest business right now and the rest of the players are swamped with debt.